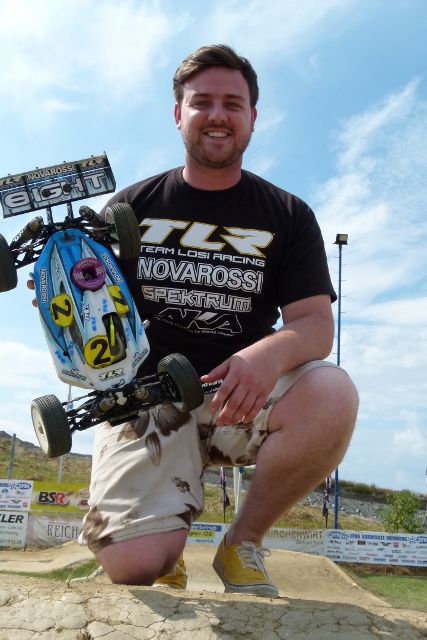 
Of all the rounds this was the most tense round of them all, it’s the last chance for you to show what you got and put yourself into the highest main you can.  For the TLR team it was all the same but Darren Bloomfield had the chance to take the overall TQ of the European Championship which it a huge deal to him and TLR.  We also had several of the team members very close to making the Semifinals so the excitement was definitely high in our pit.


When the final round started this afternoon we knew it only can down to Darren and two other drivers for the TQ.  Darren did have the advantage being in the final heat and being able to see what the other two drivers would do for time.  Darren knew if the others were not able to TQ he would have it and that is exactly what happened.  When it came down the Darren’s heat he had known the TQ was all his.  Despite securing the TQ Darren would go out for his final round a put down the fastest run of the event and take the final round TQ.  Teammate Miguel Matias had some big mistakes that would give him his first rough round that will not mean much as he was already secured himself 6th overall, which is a great starting position in the semifinals.  Alex Zanchettin would put in another strong run in Q5 but looks to be just missing out on the semifinal main for now.  He will be looking strong tomorrow and plans to bump himself in.  This is the same for Hannes Kaufler and Henrik Nilsson also putting in great runs in Q5 but will also be on the outside looking in tomorrow for the semifinals.  I am very happy with the results of the team at this point with two drivers in the semifinals and a few others just outside that will the consistence that they have had could let themselves bump their way in.


IT’S ALL ABOUT TOMORROW!!