A TLR Racer had put together a quick spring chart for the new TLR Low Frequency Springs (TLR233012 - Front, TLR233013 - Rear).  Ruffy Rios was kind enough to share this chart on Facebook and sent it to me so I could post it to the blog as well.  Enjoy!! 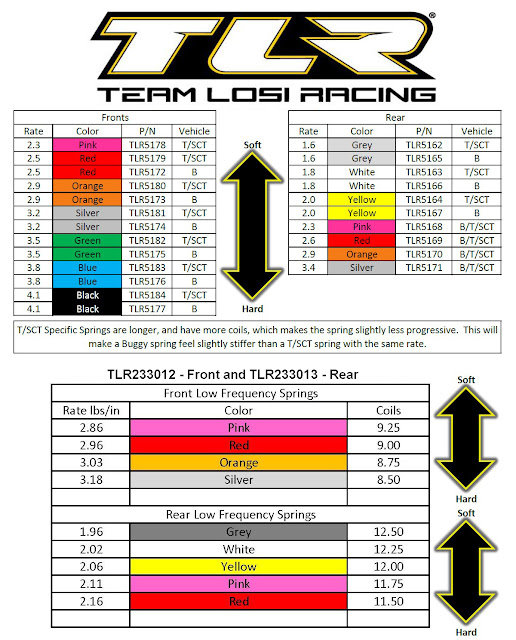 Yesterday we returned back to the office from the 2013 RCX Show at the Long Beach Convention Center in Long Beach. During the weekend all of us at Horizon had the opportunity to hang out with everyday customers whether they were new to the hobby or advanced drivers or pilots. Each year on Saturday evening after the show,  RC Car Action has a banquet where all of the industry people meet and socialize. This year was no different than any other year we've attended this banquet. Great food with great friends and on top of that we have the Readers Choice Awards Ceremony. The awards are for the Readers' Choice for all of the products that the reader's of RC Car Action vote for earlier in the year. Like many other years we win an award or two. But this year was a bit different. We won Readers' Choice Nitro Buggy of the year. Now one may ask, "What's different? Team Losi Racing has won this award a few times." Well let us tell you what's different. 2013 marked the 7th consecutive year that the 8IGHT buggy has won this award. This speaks volume to everyone at Horizon, Team Losi Racing, and the most important people in our industry, the customer. The customers'/readers' are the ones who vote for this prestigious award. Today, as I took the award out of it's box and placed it next to the other six awards it hit me, "WOW"! We have won SEVEN of these awards. The 8IGHT has never lost since it has come to market. The awards include 2007, 2008, 2009, 2010, 2011, 2012, and 2013. It's truly amazing that the 8IGHT buggy has been such a popular nitro buggy for such a long time and arguably during a time that 1/8th buggy class was at it's peak in the level of competition that is out there during these past 7 years. For all the races we've won and lost, the ups and downs, the racers who race for us today and those who left for greener grass, the developers we have and to those who have left us to go onto bigger and better things, one thing remains consistent, the Team Losi Racing 8IGHT Buggy is still the most popular and highly sought after Nitro buggy in the 1/8th Nitro Buggy racing market. We would like to personally thank all of the readers who voted for the 8IGHT buggy this year. Thank you! We would like to also give special thanks to all of the people who've been involved in the constant development, marketing, and performance of this very special racing buggy. We would love to name all of you but the list is to long. Thank you to all! I can only hope that next year we can brag yet once again about number 8IGHT! 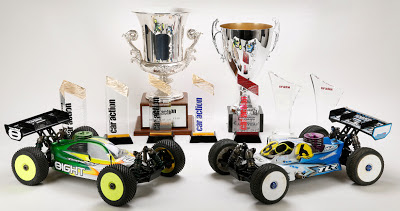