Aigoin TQs and Wins Round 2 of French Nationals

The 3rd round of the French Nationals was held at Cogolin track in south of France. Team Losi Racing /nVision driver Yannick Aigoin and his TLR 8IGHT 2.0 Euro Spec Buggy would continue on the mission to keep his title after taking the TQ and overall win. With two rounds to go, the current champion Yannick is on the right track to reach his goal. 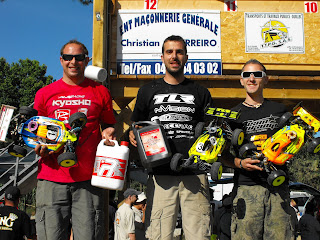 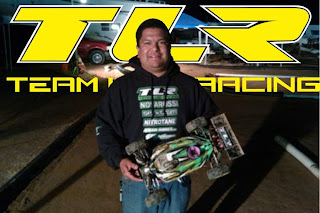 Over the weekend CVR in Madera CA. had their Annual Memorial Day Shootout! This track is known for it's sandy base and rough technical layouts. I ended up TQ in both buggy and truggy with my TLR 8ight 2.0's on Losi Green Blockheads on buggy and Losi Green Digits on truggy. It was a long day with three rounds of qualifying and mains that ran into the night. Just as the pro buggy A main started so did the rain! It started off with just a few sprinkles and then progressed into a lite steady rain, but the track with it's sandy base soaked it up. At the end I held on to the lead and cruised in for the victory with a little bit of a muddy car. Before the start of the truggy A main it started raining a little harder so I decided to pack up and save my truggy before I head to the Nats. All in all it was a very fun event and a good turn out and want to thank CVR and the track crew for putting on a great race! 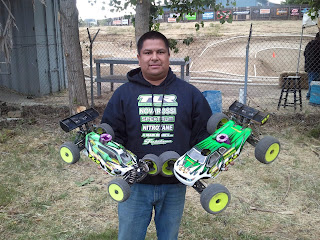 Nor-Cal Series Rnd 2 was held at Delta R/C in Antioch CA. Track had an awesome layout of big air and fast wide lanes made for some great racing! I ended up qualifying 2nd in buggy and TQ in truggy. In buggy I used Red Eclipse and truggy I ran Green King Pins. My Novarossi powered TLR 8ights felt really good going into the mains. First up was truggy A Main and it started off great and led from start to finish with a lap on the field in the 25 min main. In buggy it started off ruff as I tried to go for the pass off the start and ended up in hay bails. I started to to find my lines and move through the pack, but Austin Blair the leader was way out front so I drove smooth and made my way into second as I closed into about 10 seconds of him until he had a flame out problem. I moved past and drove a smooth race and ended up with a 2 lap lead and about 2min to go I crashed over the big double and pulled out my front left turnbuckle from the ball cup and tried to stay out and limp it around the track to see if I could hold him off to the end, but the damage was done and he got by me on the last lap as I finished just 9 seconds behind with three wheels. It was a fun day of racing at Delta R/C with a good turn out and can't wait for the next round!

Phillip Atondo
at 9:41 PM No comments:

One season ends, another begins... 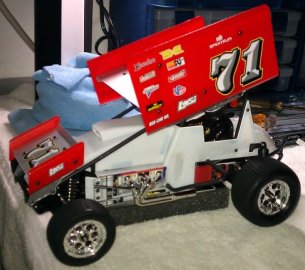 Hey everyone! Just wanted to pass along an update from the Losi/TLR team here in . Since November of last year, we had a great program start in , running the Losi Mini-Sprints on an indoor carpet oval track. The Mini-Sprint was the perfect choice of cars because of the size and relative ease of operation. Many racers had not touched a radio in years, or never driven an R/C car, and by the end of the season everyone was challenging for A-Main spots.

More than 120 different racers came out over the 6 months of racing, many recognizable names in Colorado Motorsports. Track organizer Terry Plummer had the following to say after the last race of the season:

"The list of names participating included racers and race car enthusiasts from all different forms of full size racing. Racers and Champions from Midgets, Sprint Cars, Legends, Modifieds, Supermodifieds, Street stocks, Late Models, Fig 8's, Trucks, Mini-sprints, Go-carts, Quarter Midgets and so on. It was an excellent opportunity to get to know and to rub elbows with the best of the local talent. What a tremendous group of individuals! What terrific competition!" 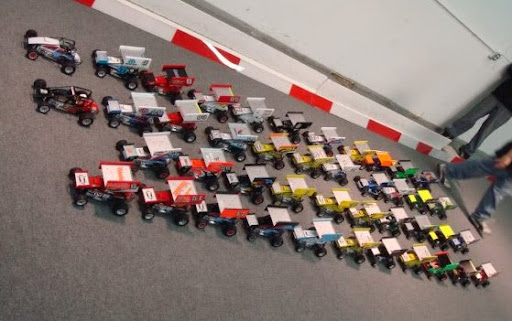 So now we move outdoors, starting tomorrow at the 1st race of the Colorado State R/C Pro Series, back at Colorado Fast Track in - home of the 2010 ROAR Nationals. Both myself and TLR teammate Matt Chambers should be in attendance at most of the series races:

Feel free to stop by if you're in the area at any of these races - it's a great time of year to be racing in Colorado!